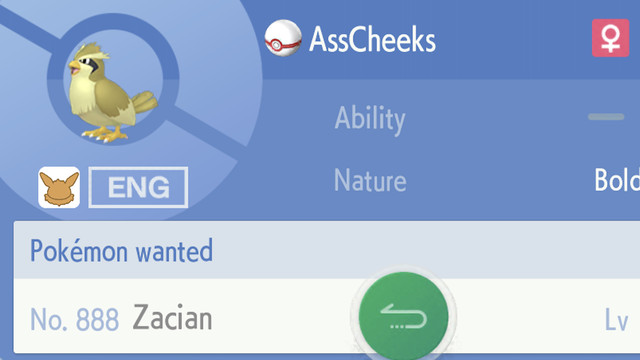 What is a Pokémon worth? This may seem like a philosophical question, but it’s one that Pokémon players have to make all the time when they trade with one another. Maybe there’s no right answer — but in some cases, there’s definitely a wrong answer.

Pokémon Home, the cloud-based storage app that facilitates monster exchange across titles, launched earlier this week, and with it game the re-introduction of the Global Trading System. With the GTS, players can upload monsters for trade and ask for something specific in return. And while many of the trades sound sensible enough, others are bold enough to make you wonder if you’re hallucinating.

Let’s say, for instance, you want a Pidgey. This is what the GTS spits back at you:

Every single one of these players wants you to give them a legendary monster in exchange for one of the most common creatures in the game.

For veteran fans, this phenomenon is pretty familiar, to the degree that it’s entirely possible some of the trade requests are memes.

Now this is the GTS I remember pic.twitter.com/4pPCnQP3Df

Some have got to be legit, though: Pokémon is largely aimed at children. Of course Timmy wants to see if he can get something awesome for his time. And with the prevalence of hackers who can generate whatever monsters they want, honestly, the odds aren’t that bad!

But beyond the laughs, it’s fascinating to poke around in the trading part of the app, because Pokémon Home tells users what others are doing. Unsurprisingly, the most-traded animal is Litten.

Litten is also listed as the most “popular” Pokémon, though it’s unclear what, specifically, that means. Is popularity trading regularity plus how often people request that Pokémon, for instance? Whatever the case, it’s clear that Pokémon Home is seeing a lot of action in the couple of days since it has launched. As of this writing, players have made over 670,000 trades with one another, according to the counter on the app.

One of those has got to be a successful Pidgey-legendary trade, right?