One illustrator brings two gaming giants together in an epic crossover, giving fans of both franchises an idea of what Overwatch‘s heroes would look like as Pokemon.

The buzz around Blizzard’s high-energy team-based shooter Overwatch hasn’t died down since its initial release in May of 2016. With 25 million registered players, a successful end to its most recent Year of the Rooster event, and some possible evidence on an upcoming hero (that may or may not be who fans think it is), it’s safe to say that Blizzard’s game reaches far and wide across the globe, attracting the attention of all types of gamers. One kind in particular is Pokemon enthusiasts, who have become increasingly more prevalent as the years have gone by, what with the company’s recent sweeping success in Pokemon Sun and Moon, and Pokemon GO.

The “Watchemon” crew is led by an unchanged Winston, who introduces himself as Professor Banana, seemingly a clever nod to his fulfilling a Professor Oak-type role in the coalesced universe. Winston/Professor Banana sets the stage for the mashed-up world: “[It] is inhabited by ‘heroes.’ They’re really cool! Some people even keep them as pets.” Cartoon Winston then asks the audience to assist him in recalling the names of all the Watchemon.

First up is the Pokemon version of the cavalry-calling Tracer, who gets a full evolution of monsters named after her time-hopping abilities and, of course, her distinct accent. She’s a normal/flying type that moves from Hasti to Quickli to the hilarious Flippybrit that “never forgets… never forgives.” 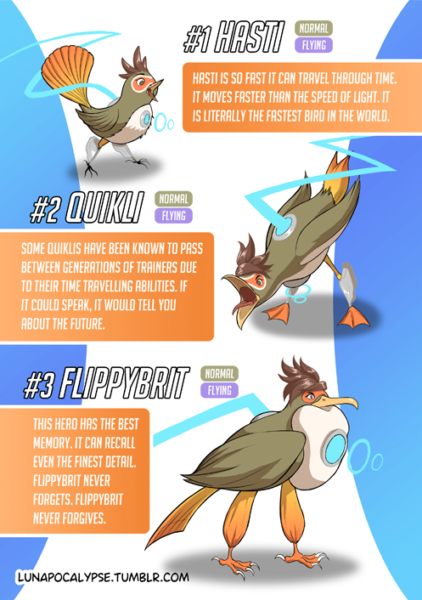 Of course, there are plenty more Watchemon for Zenyatta, Soldier 76, Widowmaker, and Hanzo, and even some two-phase evolutions in Mei, Lucio (who gets turned into an adorable puppy), and Symmetry. As seen in Tracer’s adaptation, Lunapocalypse plays humor with a heavy hand in illustrating the transformed heroes, naming their evolved forms, and giving them super detailed (and outright laughter-inducing) descriptions.

Later on come one-off Overwatch Pokemon like #36 Fridge, which is a hilarious take on Bastion that pokes fun at his stand-still tendencies, and #33 Hynoon, a literal clock with giant fists — and a clear homage to McCree’s infectious catchphrase. Smooth-talking hacker hero Sombra also gets a Watchemon in the form of the Day of the Dead-inspired psychic/dark monster Haxico. Additionally, Lunapocalypse made Reinhardt an actual flame-blasting Rhino and Junkrat a double fire-type rodent with a spiked tire around his neck. Genji didn’t go unnoticed either, metamorphosing into Reflektor, a steel dragon in his signature silver and green colors that “can’t help trash talking its opponent.”

Check a few out below, and view the full Watchemon collection on Lunapocalypse’s Tumblr.

Mashups and crossovers between games and their fandoms have been around since, well, what feels like video games began. A recent example is the Overwatch and GoldenEye crossover that racked up a ton of views. It’s even bled into television, music, and film, with fans creating a Mad Max/Mario Kart mashup.

What’s different about this latest Overwatch/Pokemon collision, however, is that it’s a downright clever collaboration between two games, and capitalizes upon some of the hottest gaming commodities around, one older and one that’s still in a “newbie” status comparatively. With PTR updates and developer announcements firing out more quickly than Bastion’s bullets, many Overwatch fans have welcomed the lighthearted distraction from the more nitty-gritty behind-the-scenes details regarding the game.

Given the attention to detail and the injection of some cheeky humor, Overwatch and Pokemon fans alike would probably want to get their hands on these Watchemon — if they were real, that is.

Overwatch is out now for PC, PS4, and Xbox One.