Hey guys! It’s Zigge back with another guide.

For the last couple months, I’ve been busy studying and I also wanted to spend more time with family and friends.

Anyhow, I will today give you best tips and decks when using the Hunter, which is by the way my new favorite defensive card. 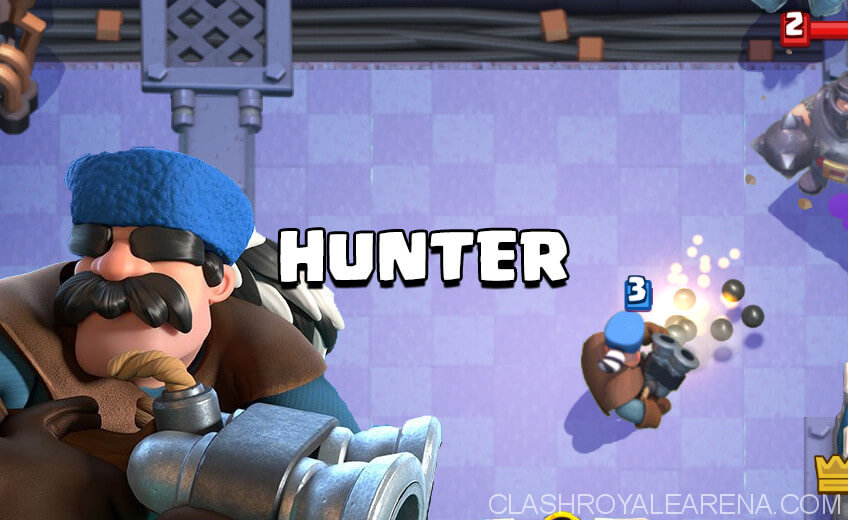 Hunter is not a direct replacement for Executioner

Many might think of comparing the Hunter to Executioner, but it’s quite the opposite.

While Executioner throws his axe in a straight line, Hunter has a spray sort-of attack.

Imagine it like all bullets coming out from the same spot, then spreading out in front of the Hunter, extending a bit further than his actual range (one of the only similarities to Executioner).

Hunter also doesn’t benefit from Tornado at all, since his attacking is already spread out, so clumping all units together is just hurting you when playing Hunter.

At a glance, it might look like Executioner is just the stronger card, but wait, there’s a lot more depth to it!

Depending on how many or how strong the attacking units are, you can place the Hunter at different ranges to maximize efficiency.

This may sound counter-intuitive to you, since he’s a ranged card and should therefore be played as far away from your opponent’s units as possible to make the most out of his range.

But as a matter of fact, if he’s right on top of an enemy unit, his bullets will all go onto the same target, since the don’t have a chance to spread out before hitting the enemy.

The Hunter is an absolute beast on defense and can take out most units.

The fact that you can either have him as a DPS card or a ranged splash damage card makes for insane versatility on defense, and he can counter nearly every card in the game.

If all 10 of his bullets hit, that’s between Mini P.E.K.K.A and Lumberjack DPS, even with his slow hitspeed.

For example, against a Knight, the Hunter will easily win if you place him a little closer to the Knight, allowing most if not all of his bullets to hit at the same time.

This is a great pairing with Ice Spirit, since it let’s you play the Ice Spirit, then the Hunter on top of the opposing Knight. This way, their Knight won’t get the first hit and it gives your Hunter an edge in the duel.

The opposite is also true, against a Skeleton Army, place him as far away as possible to make the most out of his spread bullets. They will quickly take out the skeletons, especially if they’re just walking over the bridge so they’re not able to surround the Hunter.

In between a Knight and a Skeleton Army, we have Goblin Gang!

Place the Hunter at medium range, so most of his bullets hit the Goblins and Spear Goblins, but not so close that he’ll get surrounded and killed.

With everything you have heard so far, you might think that this is the most overpowered card in the game, but truth is, he’s very weak on offense.

Due to his spread attack, he does very little damage to an arena tower, with only 2-3 bullets hitting.

He also is very easy to counter with a Lightning or Fireball+Zap combo.

Even though he counters a Skeleton Army well on defense, on offense he just gets surrounded and killed before being able to do any severe damage to it.

For four Elixir though, he has a lot of health and will actually take out a Mini P.E.K.K.A if it’s dropped on top of the Hunter.

Therefore, it’s best to treat the Hunter more as a Mini P.E.K.K.A than a Wizard, since you will most likely be defending by dropping stuff on top of him.

It’s very easy to surround a Hunter, and if placed right Goblins can completely take him out. Because of his larger hitbox, this isn’t much of a challenge.

So far I have found him to work best in Giant decks as a counterpushing tool, but also in Hog and Miner decks mainly on defense.

Feel free to leave your thoughts in the comments and whether you agree or disagree with me. I will do my best to answer them as quickly as possible, in a few days I will have my favorite Giant Hunter deck coming out, stay tuned!