With updates, activities, events, and more coming out every single day in Pokémon GO, we thought it was about time to take a look at this week, and how it stacks up with what we have seen in previous years. TWIPGH, or “This Week in Pokemon GO History,” is a series on GO Hub that takes a look at this calendar week from 2019 to 2016.

In this edition of TWIPGH, we will be taking a look at Week 22 of this year, which takes into account May 27th to June 2nd.Pokémon Press Conference 2019, Trainers were surprised with a familiar face, Snorlax! However, we would encounter him in a way we had never seen before. Behold, snoozing Snorlax! Any Snorlax caught during the event would first appear as snoozing in their encounters, and have a new legacy move, Yawn.

The first thing to note was the return of Cresselia to raid battles. Cresselia would mark the first of three Legendary Pokémon that would return to the Raid Battle scene. Besides this, Apple Watch owners were given the upsetting news that Pokémon GO will no longer be supporting the Apple Watch platform.

The biggest thing we encountered in the code this time around was Jirachi’s encounter! Indicating some very specific clues as to how we may eventually encounter this elusive Pokémon. Besides this, we saw the addition of two new moves, Dynamic Event badges, and a new change to the Samsung Galaxy Store.new Field Research rewards! Of course, as we can see, the research breakthrough for the month would be Articuno! Besides this, Professor Willow explained that he would be tasking Trainers with some Water-Type Field Research. 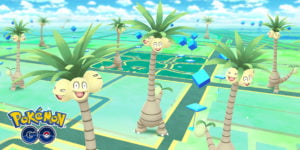 After much anticipation, Alolan Exeggutor sprung its mighty-tall head up and started appearing worldwide! Of course, this made Trainers very eager to see what other Alolan Pokémon would appear. Before this, however, GO Hub did not wait even a minute before doing a full-out analysis on this long-neck!

Just before the release of Alolan Exeggutor, we were shocked to see that it had made its way into the game’s Network Traffic. Not only did we encounter this, but code referencing all previously speculated and desired Alolan Pokémon forms! Although they would be released later on, this was a huge step towards the summer hype!emailing Promo Codes to Trainers offering free in-game items. As we all know today; however, the Promo Code function only works with Android users. Besides this, Rocket Map admitted defeat against Niantic’s latest “blinding accounts” security tactic.This Week in Pokémon GO History: Snoozing with Snorlax, Alolan Pokémon, Promo Codes, and More! appeared first on Pokemon GO Hub.